It’s my pleasure to announce that MOTODEV Studio 3.0 is now available for download. This update brings in Eclipse 3.7 (aka “Indigo”) and the “tools_r12” version of the ADT plugins.

MOTODEV Studio 3.0 supports Android SDK version 12. We initially planned to release Studio 3.0 after the Android SDK tools_r13 package was released. The recent kernel.org hack attack has had a ripple effect on projects stored there. We anticipated that tools_r13 would be released by now, but it hasn’t due to those attacks. We’ve tested Studio with both the current r12 tools and the tools_r13 branch on kernel.org. For now, work with the current r12 tools with confidence. We will continue to test with tools_r13 on kernel.org. When those tools are released we will ensure that Studio works properly.

We’ve made quite a few changes and have some exciting new features in MOTODEV Studio 3.0. There are also some changes to the way some Studio features work and we will go through those in this posting. If you need more detail on what’s changed, a great source of information is the MOTODEV Studio release notes and the Installation Guide . 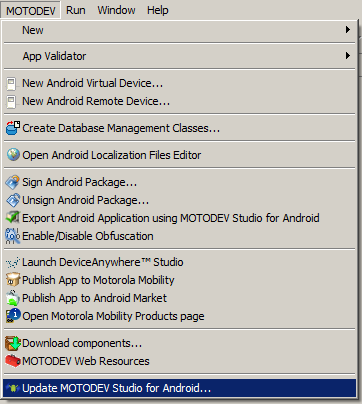 If you want to make a clean start with Studio 3.0, you can download the full installer package. If you are a “power user” and already use Eclipse for desktop or server development, you can install MOTODEV Studio as plugins into your existing Eclipse Indigo environment. Both of these options are available from our downloads page .

Regardless of which way you install, you will get the latest Eclipse platform release, the most recent Android ADT plugins, and the many features that MOTODEV Studio provides.

With every release, the Studio development team and I look for areas to improve. Rather than adding features haphazardly, we like to focus on what we consider “pain points” and see how we can make developers’ lives easier.

One of the themes of every release is updating to the latest Eclipse platform and Android plugins. For Eclipse, it’s a simple matter as the release schedules are published well in advance. The Android plugins aren’t on such a schedule, so there are times when we wake up one morning and notice there are new plugins available. Usually we see this coming as the Android tools team works in the open and their repo is visible at kernel.org .

On a similar vein, we’ve previously announced that we are deprecating our support for 32-bit MacOS systems. This policy takes effect as of this release. Users of 32-bit Macs should continue to use MOTODEV Studio 2.2.2 with the r12 Android SDK for as long as they can. While we haven’t done anything in the plugin archive to prevent users from installing the plugins on 32-bit Macs, we will no longer be testing these configurations or answering support issues involving them.

A major theme of the current release was to make things easier to find. We’ve added a lot of functionality the last 2 1/2 years and sometimes people are surprised by the appearance of a feature. So, we’ve re-ordered our menus, cleaned up the toolbar, and added more context menu shortcuts.

The most noticeable change in this “discovery” theme is the addition of a new “Videos View”. In addition to creating new features, we’ve added the ability to view YouTube videos from our playlists within the IDE. We’re planning to add a series of videos on using the tools and developing for Android. 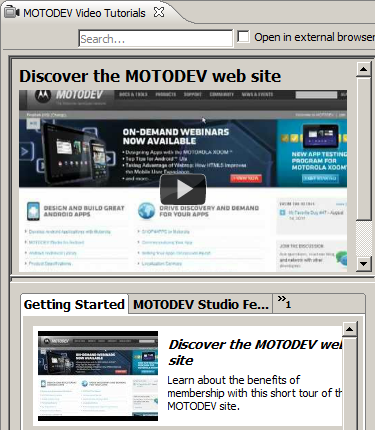 In earlier releases we added the “Code Snippets” view and the ability to generate adapters based on the fields of a database. Now comes a big feature that I know is going to make lot of developers happy. In Studio 3.0, you can now generate a lot of Activity code based on a designed layout. Not only that, you can modify the layouts and re-generate the code without destroying what has already been done. So now, instead of writing all those adapters to toggle a variable when a checkbox is pressed, just design your layout, generate the code, and enter your business logic. 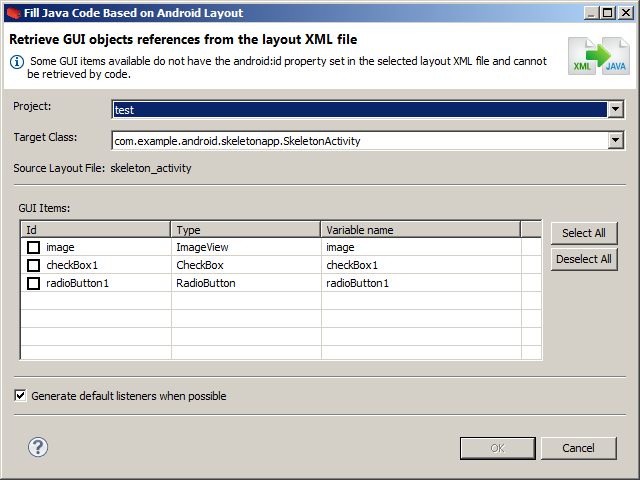 We are working on a video to show this feature in action. In the mean time, give it a try with a blank project and see how it works for you. We’re planning to add more functionality to this feature during the next release cycle, so any suggestions on ways to improve its’ behavior are appreciated.

We wanted to improve the workflows around running and debugging applications, so we’ve added several features here. The first one improves your ability to install applications: just drag and drop your .apk files onto an item in the Device Management view to start the install process. You can drag from the Eclipse Project Explorer view or from your computers’ desktop manager.

How many times have you gone to launch your app and end up starting an emulator by mistake? Even though you have an emulator running, the launch configuration may be pointing to a different AVD. MOTODEV Studio now checks when you’re launching an Android app to see if there are any compatible AVDs already running. If there are, it asks whether it should use a running instance rather than starting a new one. I’m guessing, based on our experience, this is what developers want about 90% of the time.

The App Validator is a part of MOTODEV Studio, but it’s also its own tool. We integrate the tool into the IDE and ship it as part of the product. For this release, we’ve added new checkers that will notify you if you are requesting too many permissions, are missing declarations for large screens, and if you are repeating resource IDs across different files.

In App Validator 0.8, we added the ability to decompile the unobfuscated Java code in your .apk files. We used this information to determine if you were missing permissions and several other features. Now, we’re using this information to look for possible programming mistakes. App Validator 0.9 scans code looking for API calls that cause database cursors to open. It then looks for subsequent calls to close the cursor. If none are found (or it appears that the number of closes is less than the number of opens), you will receive a warning. This is an early feature, so treat the results with some skepticism.

Themes are a nice tool for project planning, but there are always some features that defy having a specific theme. That doesn’t mean they don’t have value and shouldn’t be included, but these things tend to have less of an impact. 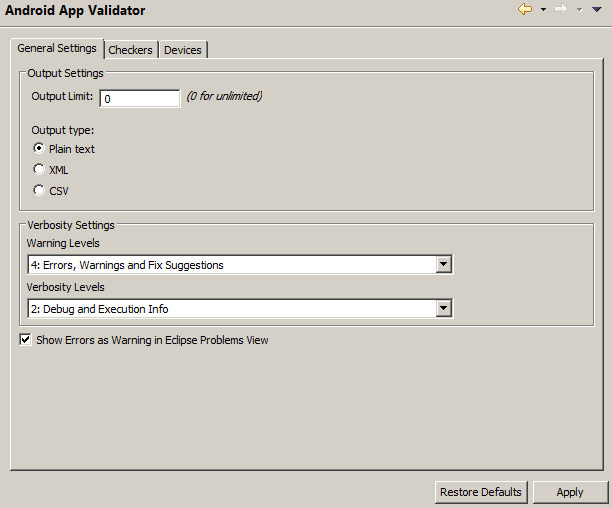 Developers who use the database feature a lot should try out the updated database creation wizard. Now, you can create databases and tables from the same dialog and bind them to your Android app using the code generation wizard. If you use databases in your app, you will find this to be a huge time-saver.

The Long and Winding Road

The road ahead looks to be interesting. Ice Cream Sandwich will be making an appearance soon, and the work of the GoogleTV team is available for the adventurous. The MOTODEV Studio team is starting to plan our next release and our activities for 2012. While we don’t know what the future holds for all things Android, we can at least put down a bit of a roadmap.

To start, we’ve contributed a new feature to Android SDK tools . This change will allow developers to discover Motorola SDK add-ons (emulator images) from the SDK and AVD Manager. This has been a feature of MOTODEV Studio, but once the ability for the SDK and AVD Manager to work with the MOTODEV site is available in the SDK tools, we will start phasing it out of MOTODEV Studio.

There’s also some new NDK (Native Development Kit) changes in store for Eclipse users. Doug Schaefer from Wind River contributed code to the AOSP for handling C/C++ projects in a nice way. Doug previously contributed code for C++ support to the Eclipse Sequoyah project and he’s improved it significantly for the AOSP.

We hope that both of these features will be in the “tools_r14” branch that could be out in early October. We usually don’t know about these things until we see the stabilization branch occur in the git repo. We know we will have to update MOTODEV Studio to version 3.0.1 to work with the new plug-ins, so expect to see an update release shortly after the “r14” plug-ins and SDK are released.

We’re beginning to start some investigation into features for 3.1. As always, if you have an idea for a workflow improvement or even something bigger, just drop us a note on the MOTODEV Studio discussion boards . We’re always on the lookout for new ideas that will make your lives easier.

Thank you for using MOTODEV Studio!