This is just a quick post to let you know that we’ve released MOTODEV Studio 3.0.2 as an update. This update is available by going to the MOTODEV menu and selecting “Update MOTODEV Studio”. 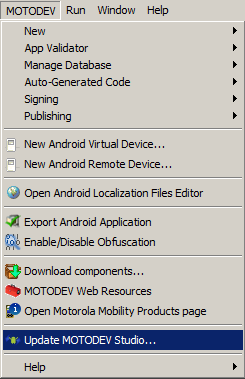 If you are updating from MOTODEV Studio 3.0.0 or earlier, you will want to simultaneously update your Android SDK to version 15. Because the version of ADT that is included with this update is intended to work with SDK version 15, you will start to get compile errors in your projects if you update them out of step with each other.

You might’ve seen some of my posts on our discussion boards or links to articles at the Android developer site on changes to the tools for Ice Cream Sandwich. If you’ve been using R.constant values in your projects in switch statements, you will need to spend some time refactoring those into if-else blocks before moving to SDK 15.

Other than the R.constant issue, there should be no major changes to MOTODEV Studio 3.0.0 users with this release. In fact, with the ADT 15 release, it appears that Google has fixed quite a few usability problems that were reported in ADT 14.

Thank you for using MOTODEV Studio!