I’d like to take a moment to thank everyone who has taken the time to download and install MOTODEV Studio for Android . I hope our product has made development of Android apps easier and has everyone more productive. I’m also grateful for those who have taken the time to let us know when they find problems by reporting them on the MOTODEV Discussion Boards .

The last year and a half has seen us go from a beta to a stable product through 6 major releases and several interim updates. We’ve added features for handling SQLite databases , localizing apps to other languages with a useful multi-language editor, and developing native apps with C & C++. We’ve also localized MOTODEV Studio to three languages along with the installation guide, and release notes. All this, in addition to several major updates to the Android platform, has kept us very busy. For 2011, we’re planning new releases of MOTODEV Studio and regular updates to our App Validator , which highlights inconsistencies in applications before they become problems for users.

I can look at server logs and analytics to see how many people download MOTODEV Studio, but I don’t really know what people do with the product once they’ve installed it. I’d like to understand what features of MOTODEV Studio are important to users and what things we could do to make developers lives easier.

So today, I’m here to ask a favor. I would like to ask anyone who develops for Android or is interested in developing for Android to take a short survey. It’s about 20 questions and it should take less than 10 minutes to complete. When the survey is complete, I hope to have a better understanding of everyone who uses the product and how we can serve them better.

The survey link is: http://www.surveymonkey.com/s/Motorola_apptools 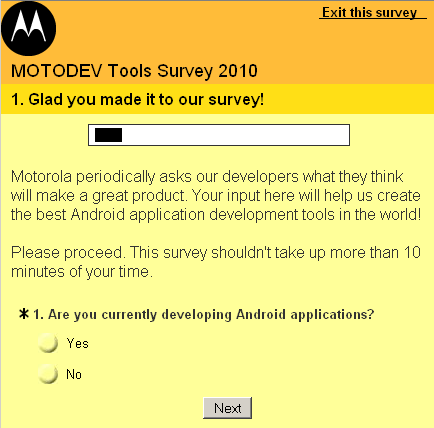 Once again, thank you for using MOTODEV Studio and we wish you all the best in 2011.